Supermarket celebrates its 10th anniversary this year. How did it all start?
Andreas: It started as a happening. There was a meeting between artists’ initiatives held in a new space at Konstnärshuset in Stockholm. The newly established commercial art fair Market came up, and all of us were quite annoyed about how exclusive it was, and someone bursted out: “Let’s do a Minimarket!” The space already had exhibition booths - toilets and shower cabinets - thus it became a kind of parody of an art fair.

Pontus: Minimarket was us playing with all the usual art fair ingredients. We divided a really small space into Hall A, B and C, and there was this mad fair director who held an opening speech every 20 minutes and so on. We also rented sound equipment to announce mysterious activities going on in the exhibition. We were ten artist-run galleries who loved our visitors... and the visitors loved us!

Which year was it?
Andreas: 2006. A lot of people showed up, and already then the idea of having an art fair in the whole building was born. And the year after we changed the name from Minimarket to Supermarket.

Meggi: I joined the team as a volunteer in 2007. I had seen a flyer at a participating gallery in Gothenburg, where I lived back then.

What has happened at the artist-run art scene over the last ten years?
Pontus: Art has in general been marginalised. Media focuses mainly on dance, music and food, while art is only reported on when there has been a scandal. In many countries censorship is exercised, and artists have to flee for their lives or they get imprisoned. In those countries the artist-run art scene may be the only watering hole for contemporary art.

Andreas: Today artist-run galleries collaborate internationally to a larger extent than ten years ago. Supermarket has inspired other, similar art fairs in Russia, Norway, Serbia, Greece and Finland. I believe it has increased the self-confidence and the level of ambition among artist-run galleries. For many artists the goal is no longer to be associated with a commercial gallery. At the same time you get the feeling of us being perceived as a threat; there are probably many who dismiss exhibition spaces run by artists.

Is there a special event in Supermarket’s history you can remember back to?
Meggi: When we visited the artist-run gallery Duplex10m2 in 2011, a gallery in Sarajevo that was drained of energy after working with almost no resources for several years. They hesitated about participating in Supermarket 2012 as they didn’t know if the gallery would last that long. However, due to their participation in Supermarket, they got new energy and contacts. Hence instead of closing down they grew into Duplex100m2 and have since participated in Supermarket several times.

Andreas: When Johan Söderberg and Trio Electromundo performed at the opening night in 2010, and all the participating artists found each other on the dancefloor. It was a performance of world class and everybody was so happy, and we felt really proud!

Pontus: I’m always surprised by the number of people that show up! Ever since Minimarket the art fair has been crowded with people enjoying its insanely creative chaos. There was a moment at Kulturhuset when they had to turn off the escalator because of all the people, and last year at the opening at Svarta Huset the queue ended way outside the building.

What’s next?
Pontus: It will be an amazing art fair with a lot of partying as we celebrate our 10th birthday! Gosh, we never would have imagined it when we arranged Minimarket in 2006!

Meggi: Supermarket has throughout the years visited different locations in Stockholm. Perhaps we will establish a more long-term collaboration with access to a large venue. The future will tell. 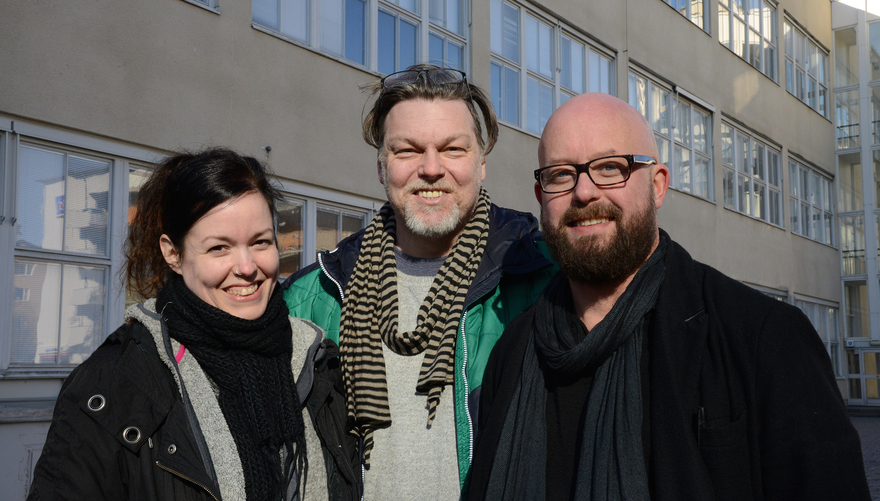