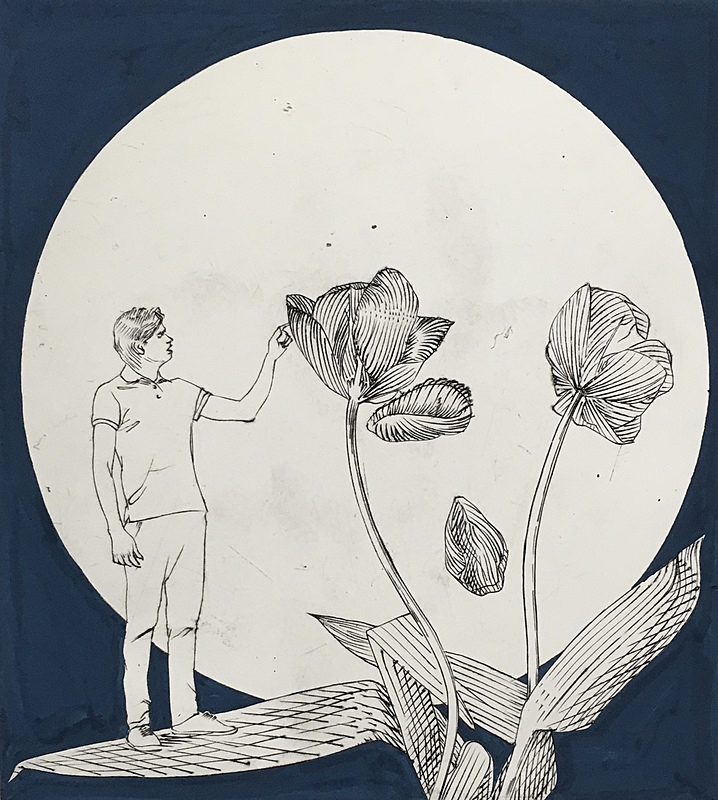 Pontus Raud, ‘The last Moon’, engraving and gouache on paper, 2020

A game changer - a small organism is changing the whole world in just over six weeks. Everyone is surprised at how fast it went and how quickly we changed our behavior. We have been so busy with the digital revolution and all the technological advancements that are moving us forward with a greater speed that we overlooked  the whole biological mechanism that is actually constantly moving us forward.

The old saying - Of children and fools you know the truth - appeared in my head in a reworked version in a conversation with my son when he was eight years old. He snapped a question out of the blue…

I respond quickly with a logical answer in my opinion - I would say in daytime because you have to make so many choices all the time. You should brush your teeth (clever fatherly choice of event), eat breakfast and then walk to work… then it is just full of choices of all kinds, all day. That's right huh?

Later, I lie in the dark, in my bed and wonder if it might be true ... could the brain work more at night than during the day?

Typically, I end up in front of the computer and start hitting the subject. I read about the so-called clock genes, which are found in virtually all cells in almost every kind of organism. In all mammals, this internal clock consists of nerve cells in a diffusely delimited small area in the anterior part of the brain. In Latin, the area is called nucleus suprachiasmaticus (NSC), which is defined as "a nucleus, located above the optic nerve intersection (chiasma)". NSC acts as a chief conductor for the entire body: its signals determine how active different organs should be.

After searching a number of different pages, it seems that measurements of the brain's activity reveal that those parts of the brain that have a connection to feelings and the preservation of memory impressions are more active during sleep than in waking state.

- Of children and fools, I think before I go for an intense sleep!